I'm no dummy. Sure, I'm not normal, but I'm not an idiot.
It seems that there are people in this world that believe that knowledge is power and that power is a license to say and do what they want to better their own agendas, willy nilly. Willy Fuckin' Nilly.

Twice this week these all-knowing people targeted me ... Me, a seemingly vulnerable mark due to my publicly declared diagnosis of being bi-polar. I prefer the term 'manic-depressive' to bi-polar. Actually, I prefer the word 'crazy'. Yep, I'm nuckin' futs. Certifiable. And this week that diagnosis was exploited and used as an excuse by these scoundrels to attempt to both deflate and demotivate me in my attempts to live and let live. Unfortunately for them, the accompanying diagnosis of a genius IQ coupled with spiritual enlightenment enables me to accept their fuckupedness and respond in such a way that they can't pick up on my snideness in response to their doings.

The first instance was typical ... a 'friend', I thought, that used my trusting and generous nature to gather information in an attempt to undermine my livelihood. Fuck him. 'Nuff said. I'll forget about it and laugh at his lack of people skills as his pursuit of the almighty dollar ultimately causes his new bride, a frequent clothing shopper at Bed Bath & Beyond's drapery department (yes, she's Indian, dots not feathers) to look at his expanding lily white belly and exclaim "Holy Cow! He is not Slurpee worthy!". Eat beef, Scott. Curry doesn't help your complexion.

The other is a bit more complex. My 19-year-old daughter point blank told me that she is embarrassed to have me as a father .. that she doesn't want me to take part in her birthdays, holidays and, most hurtful... her wedding. What could I have done to warrant such a harsh reaction from my offspring, you may ask? Plenty. Except that most of her issues stem from incidents that took place during a highly manic time... three years ago. Sure, there was jail. There was a pleasant visit to the county mental ward following a humorous overdose on Melatonin. Ok, ok... a couple of hospital stays and three jail visits ... mania is unpredictable. I'd be manic any day ... beats the flipside. The flipside is days in bed, overdoses and repercussions. Mania is unbridled power.

No, I think my daughter's, and son's, biggest reason for declaring unconditional love a hoax was my finding a soul mate and, more importantly, finding my own voice and self. My refusal to censor myself .. my belief in things non-mainstream, non-conformist... to not be like other 'dads' ... makes me an embarrassment.

What this shows me is that conformity and acceptance of societal norms is alive and well in cul-de-sac-land and that my children are unwitting lemmings. They are no different, at least for the moment, as the fodder that cling to Glenn Beck, Al Sharpton, Sarah Palin, Sharon Angle and their ilk because they cannot, or will not, think for themselves.

Me, I'm going to be myself. I'm going to think for myself and, by Cosmic Energy, (some may say God), move forward as an individual because I know that individuality is much more powerful than a throng of conformity.
Posted by Jeffrey Brunk at 10:37 PM 1 comment:

I was called a 'D-Bag' recently. I don't have a problem with that...I'm quite sure that I have been called and continue to be labeled a douchebag by those who hesitantly claim me as a former family member, spouse or parent. No, I was called a douchebag by a woman who doesn't know me from Adam. This lady is a friend of a friend on Facebook. A friend of a friend that I've never met, no less. Why, might you ask, was I referred to in such unflattering terms? Take heed before reading further, lest you be tempted to attach a moniker to my countenance as well ...
I was judged and found to be an unworthy person by the woman for simply stating the obvious... My 'friend' had posted a photo of what appeared to be a rather 'fresh from the oven' baby and the baby had a noggin that caused my loins to scream just thinking about what childbirth must have been like. I mean, this kid's head was enormous. All I said, without malice, was "Wow, that's one big head." That's it. Nothing more, nothing less. 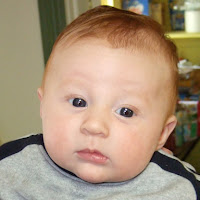 Take a look. This is the head in question. If I was wrong and spoke without thoroughly inspecting the photo, please, please tell me. I'm a big boy, I can accept correction. However, anyone who doesn't agree that this kid resembles a Marvel comic book villain might need an appointment at Pearle Vision.
Posted by Jeffrey Brunk at 4:19 PM 1 comment:

Life as I see it.

Now I have to wash the damn shirt again.

Yelps From The Closet | Promote Your Page Too